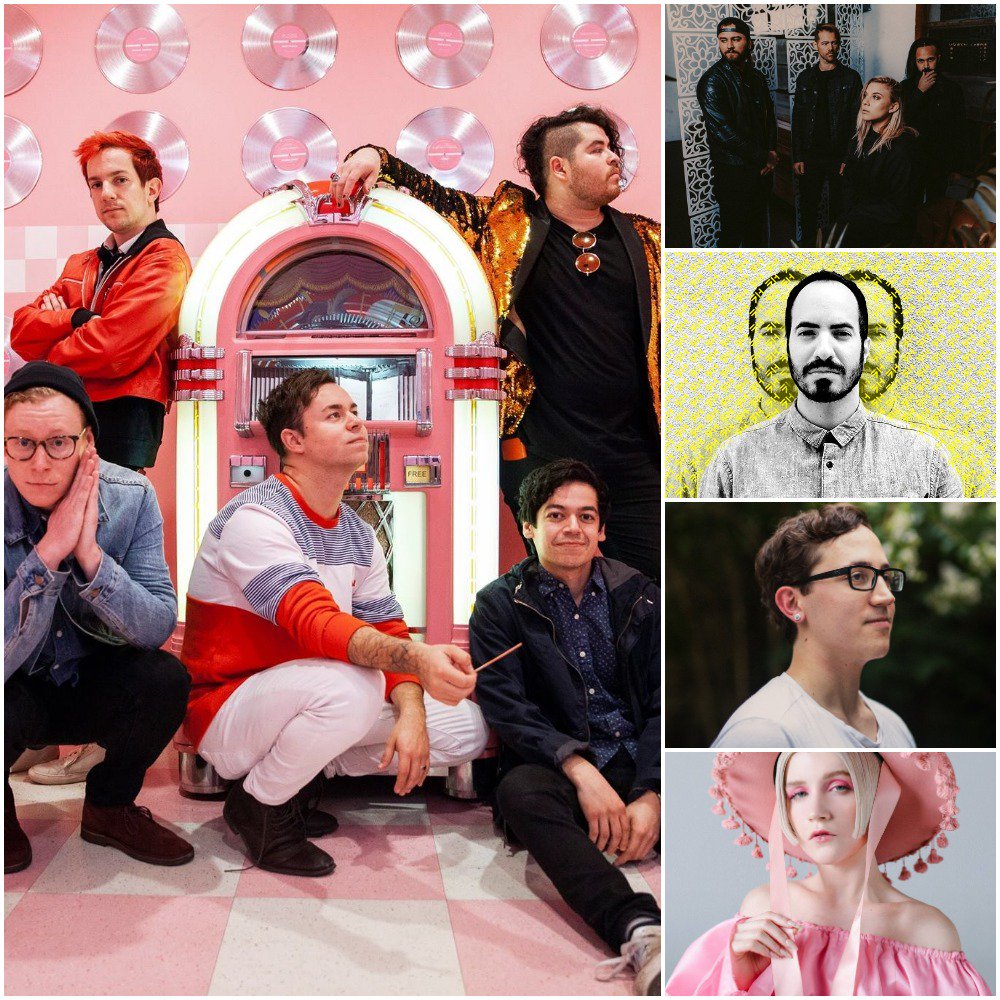 Have you ever found yourself idly staring at your computer screen, trying to think of what to post next on social media but feeling completely stumped and, if you’re being honest, overwhelmed? So you think for a minute and say to yourself, “How did my favorite artist do it? How did they climb to the top?”

Here’s the deal. Major label artists and emerging indie artists are not on the same playing field. They just aren’t. And while it can be tempting to look at the artists who have “made it” as a source of inspiration, what you really want to be doing if you’re looking for inspiration as an emerging artist is to look at other emerging artists and see what’s working. Because when you get down to it, even though there is something to be said for finding inspiration in the major label artists, what Taylor Swift does and what you do will not attract the same results.

There are a ton of amazing artists out there to find inspiration from, and I would definitely recommend trying to brainstorm a few artists who are just slightly more established than you but who have a similar sound and audience, and look to see what they’re doing on social media, and start assessing what works and what doesn’t. This will be a great way to gain inspiration on a daily basis, and it’ll also give you an idea of what your ideal fan does (and doesn’t) like.

In the meantime, we’ve gathered five artists who are crushing it on social media along with exactly what it is they do that works — and how you can replicate it on your own pages.

Since I’ve known Shadow of Whales, they’ve always put their heart and soul into their fan base. While others may find social media daunting, or a means to an end in their music career, Shadow of Whales embraces it wholeheartedly. They see it for what it is — a way to connect with their fans, make them feel special, and show them how much they appreciate them, and they do that consistently.

What Shadow of Whales really excels at are two things. The first is in clearly conveying their brand (to spread love and hope as far as sound can reach) and the other is sharing their lives in a way that makes their fans feel included.

Here’s an example of the band being total goofballs — which is perfectly in line with their personality and their brand. They also paired it with an announcement that they’re working on new songs.

Take note here — do you see the difference between something like this that engages their fans vs. just posting a photo and saying “working on new music, stay tuned”?

Example #2 is them sharing their lives in a way that makes their fans feel included. This post came after their song “Words” won at the Independent Music Awards, both the initial award from the judges and the VOX POP FAN award, because of their fans voting for them. Notice how they share a photo of a genuine moment with their fans, and then pour their love and thanks into the caption?

One more example of them making sure their fans feel included — here they show a behind the scenes from the studio, but in an effort to engage their fans, they ask them about their favorite ice cream flavor, to help them find inspiration. It’s simple, quick and easy to answer, and it gets their fans feeling a part of the process

How you can do this: First, take the time to really get to know your brand. I always suggest this TED talk by Simon Sinek as a starting point. Then, look around at how other bands (like SoW) are conveying their brand to find inspiration for how you can do the same. It can be through behind the scenes photos, articles about things you care about, or reposting quotes and photos that matter to you.

The second is, always make sure your fans feel included. Ask them questions. Show them the less than glamorous moments. Let them know you trust them with these precious moments in time, and you’ll see how much deeper that bond grows.

Rivals have been one of my favorite case studies over the last year. In fact, I did an interview all about their social media strategy as part of a seven-day summit for Music Launch Co. last year and it was incredible. First of all, this band is SO full of energy, and you can tell the second you go on their page that they are the real deal.

Besides the fact that their brand is seriously ON POINT, one of the main things I love about Rivals is that they are so good about sharing their lives and their stories with their fans, and inviting them to be a part of the process. It doesn’t matter if they’re doing something really amazing like playing a festival or just hanging out, they invite their fans in.

So for instance here you see them putting together a video of their time in Mexico, and inviting their fans to spend 13 minutes with them. They’re invited in to see what the band saw, feel what the band felt, and be a part of the process.

Or here you see them sharing news about a tour date, but they pair it with a goofy photo, so it’s not just a flyer that says “come out and see our show.”

How you can do this: Show your fans that you want them to be a part of the process. Invite them in with behind the scenes videos and photos, sharing unfinished songs and asking for their help on the chorus, or just asking them a question in your captions. Don’t be afraid to show them who you really are.

Sam Hale is a great example of an emerging artist who has worked really hard to build his following to what it is, and then kept that up with quality content. With 18.7k followers, Sam isn’t signed to any label but he does find success in reaching his audience and in turn getting booked for more shows, getting more press, and building his career. In a nutshell, he’s proof that consistent strategy pays off.

So, what’s working for Sam? He does a great job balancing work (i.e., the more “professional” images like shots from his shows and album covers) with his personal life, which gives fans a taste of who he really is. Because when fans feel like they can really connect with who you are and share the same beliefs/interests/hobbies, that’s when the engagement really starts to go up.

Here’s an example of one of the more professional shots. He did a few really cool things here. First of all, he re-used an old photo and changed it up a bit. That’s resourceful and proves you don’t always need to have a million photos to keep up. Then he added a whimsical caption that reflected the photo but also played into some bigger themes, to tie it all together. It’s simple, but it’s creative, and fun, and shows his personality.

Meanwhile in this photo you see Sam with his dog Lucky, who is a regular staple on his IG feed (and who doesn’t love dogs?!) He tied the caption into what he was doing at the time (playing shows/getting back into the studio) and also mentioned his dog and her IG page. It’s a win for dog lovers and fans of Sam Hale! 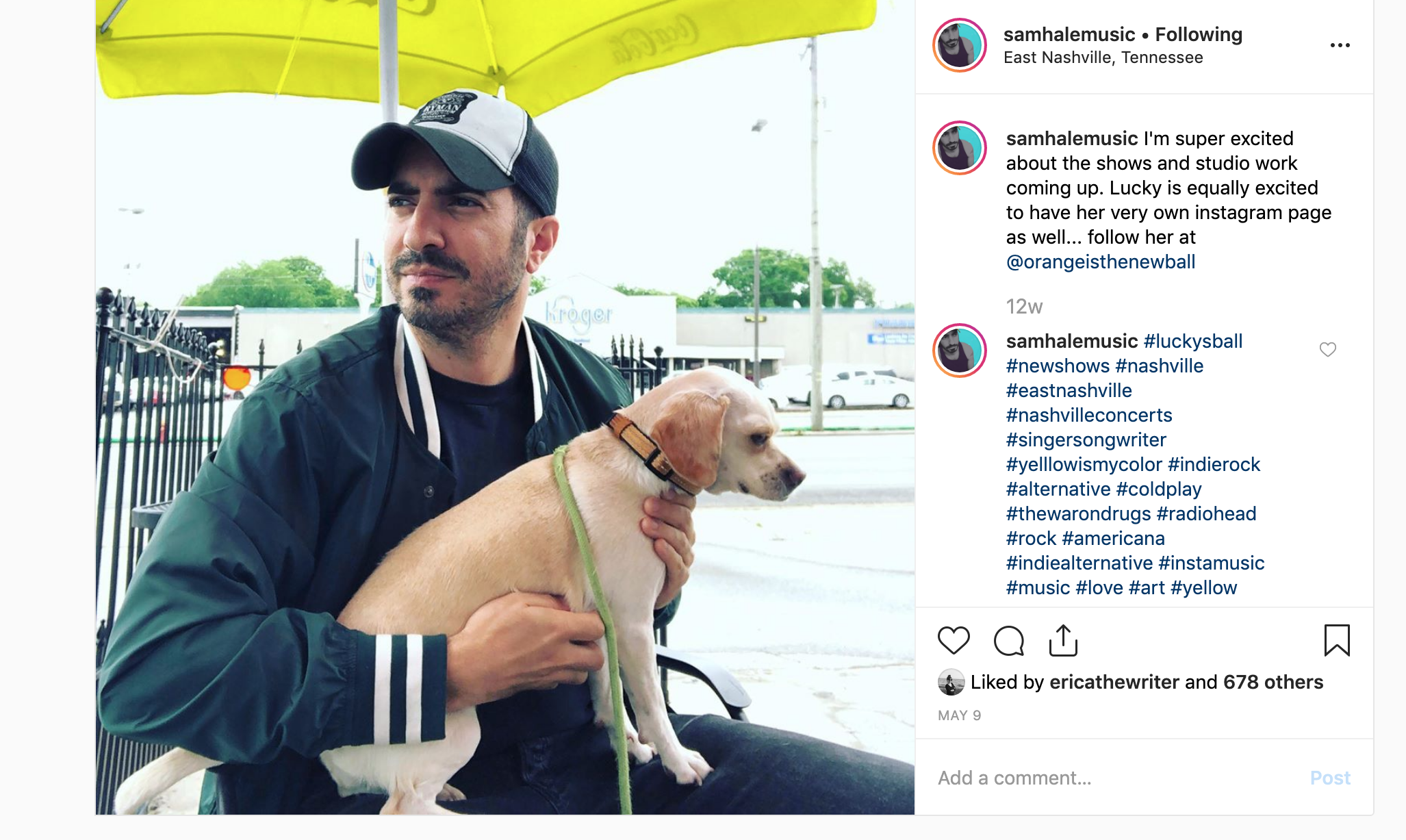 How you can do this: It starts with not being afraid to show your personality. Share who you are and what you love with your audience, and find a way to make even the business stuff relatable and fun.

Talk about a strong, cohesive aesthetic. When you visit Anja’s page, it’s immediately clear what her vibe is all about. Lots of color, lots of different scenery and location, lots of fashion. And then there’s the captions! While there can be a pull towards long, story-driven captions (which do have their place depending on your brand) hers are the exact opposite.

They’re pretty simple, quick, and to the point, and because they’re so simple and engaging, they elicit a lot of response. Not to mention, she replies to all her comments. All of them. (And she has almost 24k followers!) 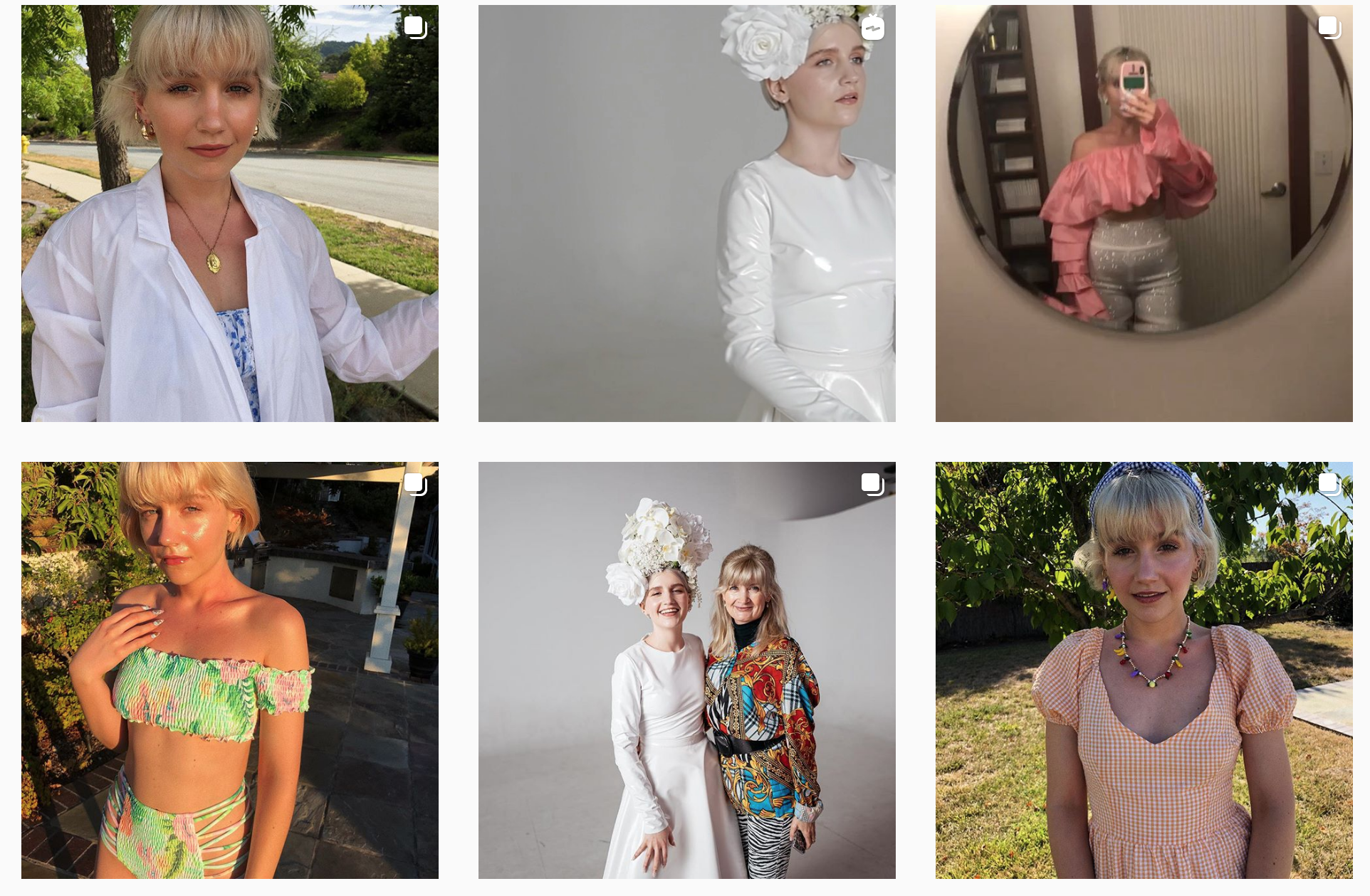 How you can do this: Find what works for you. If it’s long captions that tell a story, go for it. If you want something quick, keep it concise. (just make sure it’s still engaging — Anja’s captions may be short but they’re also engaging and full of personality) 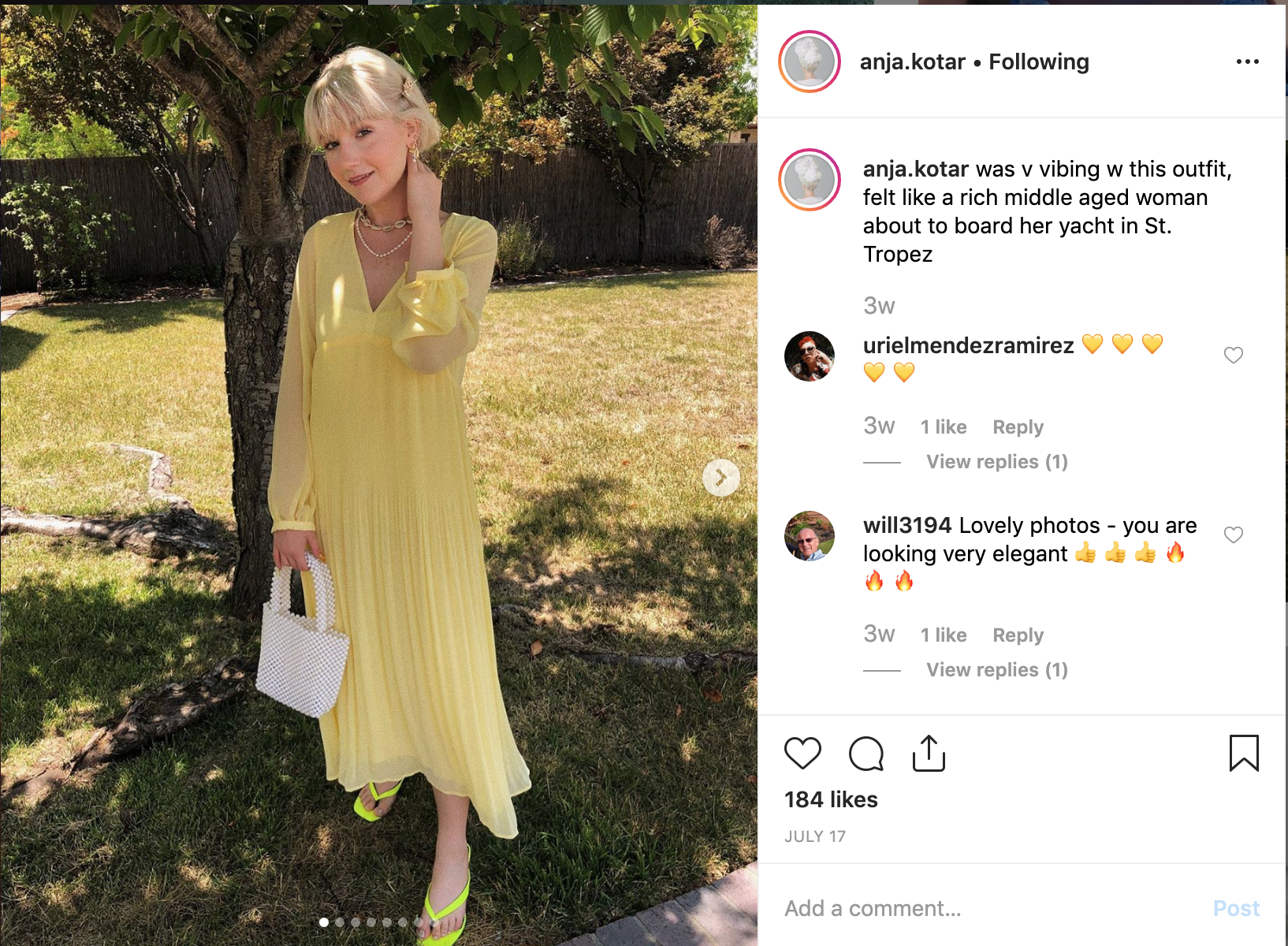 There’s a lot to love about Jon Pattie’s social media. Now, when I first met Jon a few years ago, his brand and his social media was a mess. But then he partnered up with his manager Vicky Vargas, got super-duper clear on his brand, and since then, his career has blossomed.

A huge part of Jon’s brand has been personal growth and sharing his own journey and struggles, as well as his day to day in overcoming these things. Having a solid message is the first step in an engaging social media presence and with that, Jon has been able to make great posts such as this one that includes a powerful quote that accurately reflects his brand and message. 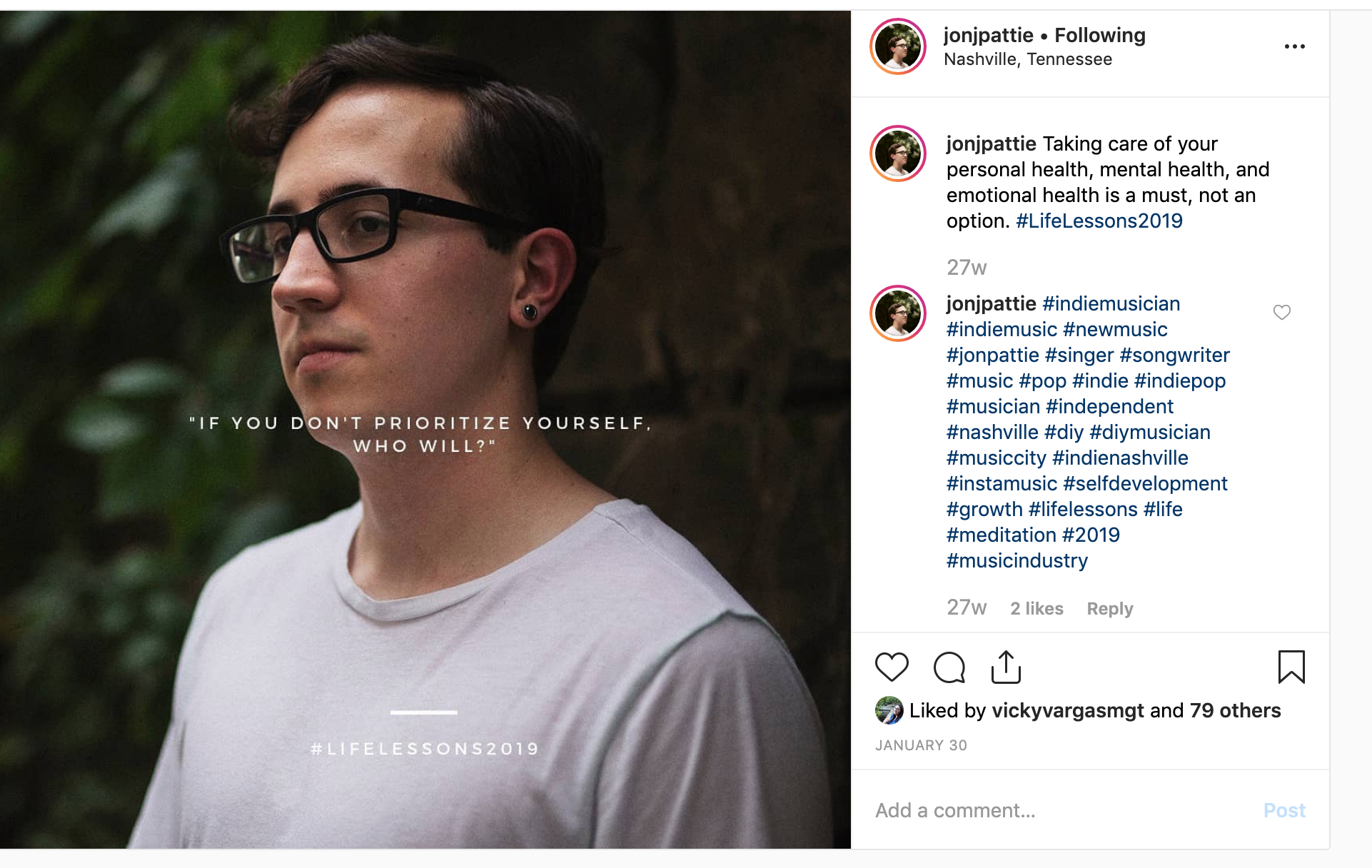 Or this one which is sharing a blog he wrote on a topic that while difficult to share, has the ability to really reach people in a raw and honest way. 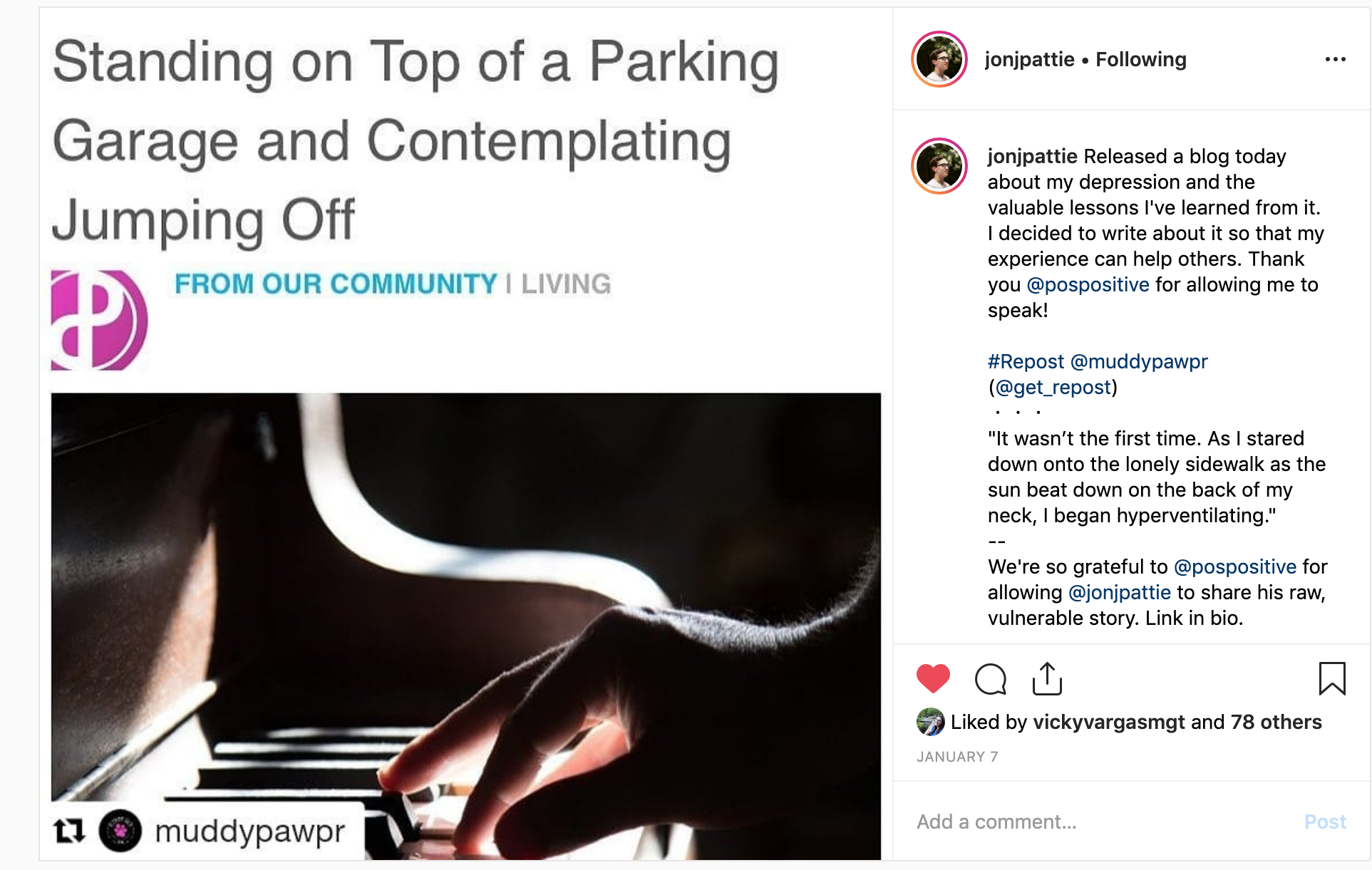 Then there are posts like this that pull the curtain back and show the behind the scenes of his life. It allows fans to see all aspects of him, and to see that he’s not just another artist on another stage. 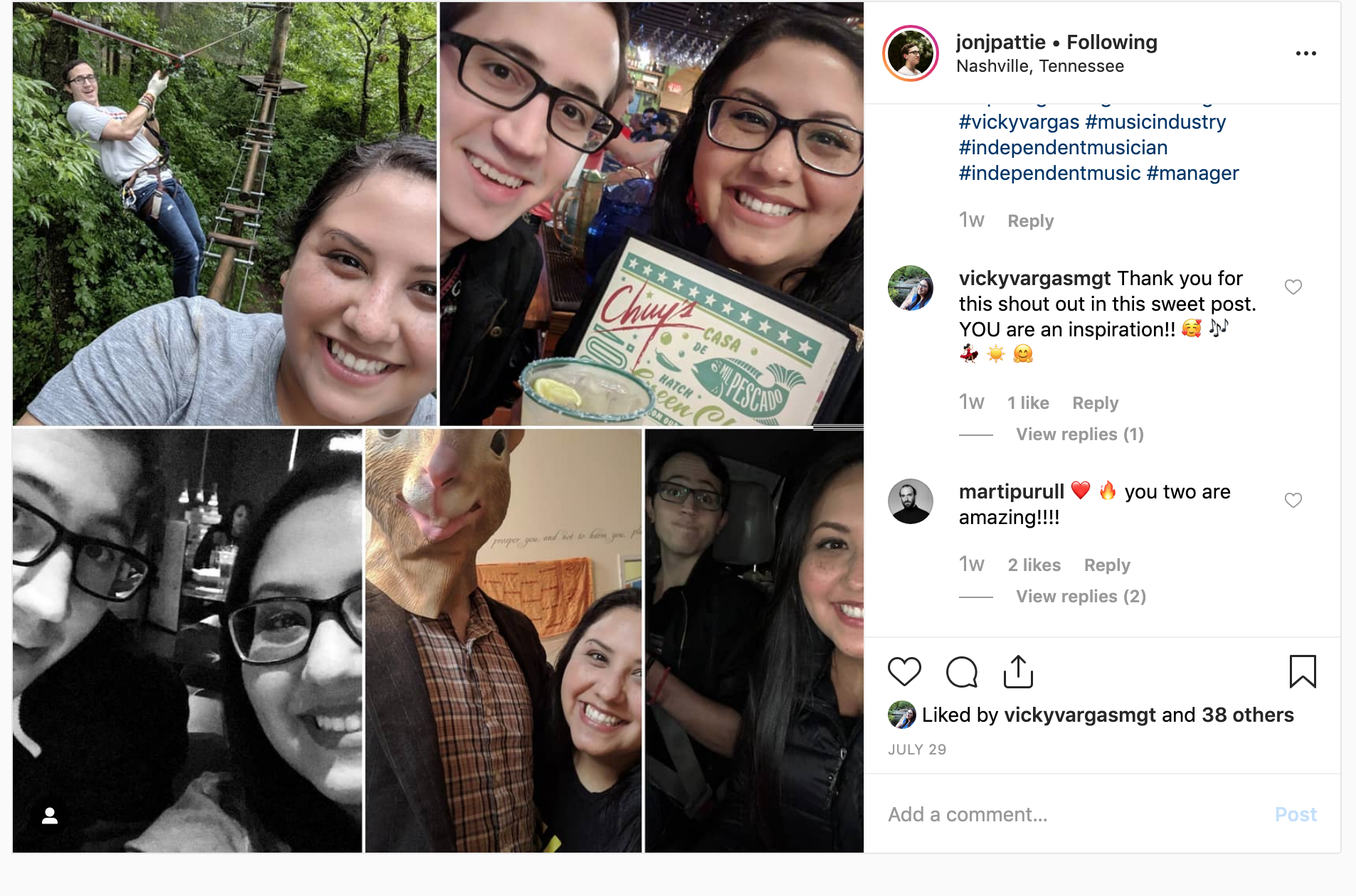 How you can do this: Once you know your brand, don’t be afraid to get vulnerable and show it in every way you’re comfortable with. Sometimes that’s behind the scenes videos, sometimes it’s blog posts, other times it’s quotes—but it’s always being candid with your fans.

Next up: The Social Media Metrics That Really Matter in Music (And How to Boost Yours)

Angela Mastrogiacomo is the founder and CEO of Muddy Paw PR, where her artists have seen placement on Alternative Press, Noisey, Substream, and more, as well as the Co-Founder of Music Launch Co. Her free training ‘Reaching a Wider Audience Without Spending A Dime’ helps emerging artists cut through the noise and get in front of fans and industry influencers in just a few steps. She loves baked goods, a good book, and hanging with her dog Sawyer.